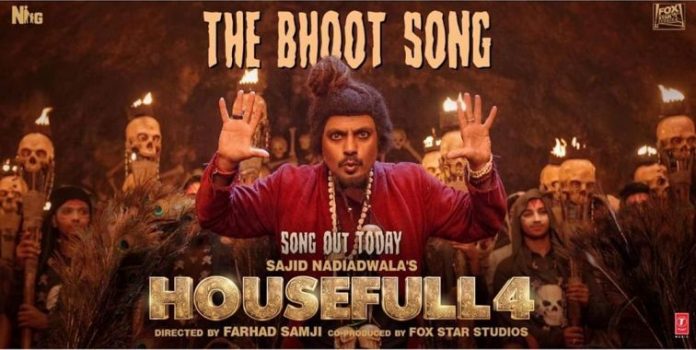 Laugh riot Housefull 4 is all set to be released in theatres on October 25, 2019. As the release date approaches, the makers are keeping up the curiosity of the audience by releasing the songs from the film. After Ek Chumma and Shaitan Ka Saala success, the makers have now released The Bhoot Song featuring Akshay Kuma, Nawazuddin Siddiqui and others.

The song has been sung by Mika Singh and Farhad Samji and is composed by Farhad and Sandeep Shirodkar. Akshay had earlier shared the poster of the song which features Nawazuddin and the rest of the cast standing behind him.

The makers of the film had earlier released the song Bala song which turned out to be a huge hit. Apart from the song, Akshay Kumar started off the Bala challenge which garnered a lot of attention from fans to stars from Bollywood, who took up the challenge.

The film is helmed by Farhad Samji and has been produced under the banner Nadiadwala Grandson Entertainment by Sajid Nadiadwala. The film will be releasing during the Diwali season and is expected to once again win the hearts of the audience. Housefull 4 is the fourth installment of the Housefull franchise. The film was earlier expected to be directed by Sajid Khan but due to the allegations in the #MeeToo movement, Khan dropped out of the project.