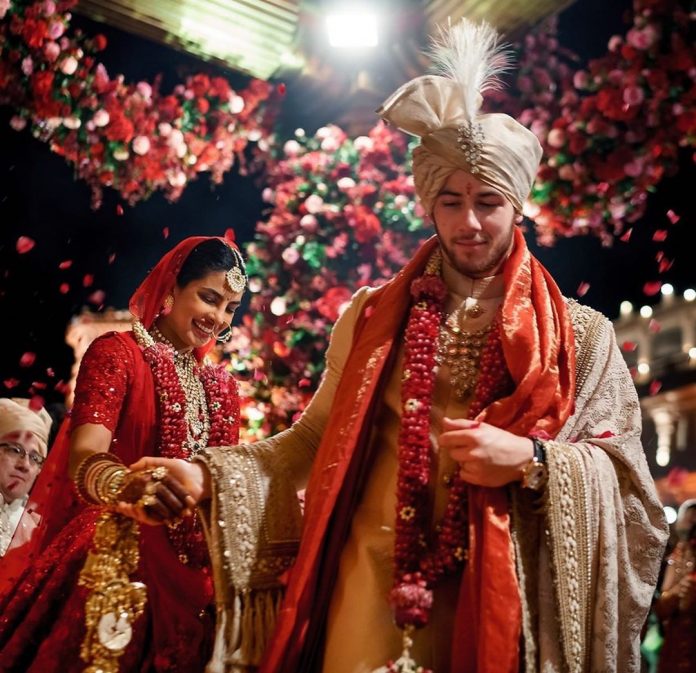 Bollywood diva Priyanka Chopra got married to International singing sensation Nick Jonas on December 1, 2018 in a big fat Indian wedding and a white wedding in Jodhpur, Rajasthan. The celebrations were extravagant and were close to what every Indian bride would have dreamt of. As Priyanka and Nick celebrated their first anniversary, the actress took her Instagram account and shared a couple of glimpses from her Hindi wedding and the Christian wedding held last year.

One of the pictures had shown the two holding hands and another picture showed the couple embracing each other. Another snap showed Priyanka looking gorgeous in a red lehenga while Nick looked dapper in an ethnic outfit as they were performing Hindu rituals. Priyanka and Nick were the talk of the town when their wedding was announced.

Before the wedding, the couple had quietly got engaged in a close knit ceremony held in Mumbai at her residence. The wedding ceremony was attended by close friends of Priyanka from the industry and family members and later the couple threw a grand wedding reception that was attended by the Who’s Who of Bollywood.

Nick and Priyanka are currently busy with their respective work. The actress was last seen in the film The Sky Is Pink which also featured Farhan Akhtar. Priyanka Chopra is currently filming for the film We Can Be Heroes.

One year ago today we said forever… well forever isn’t nearly long enough. I love you with all of my heart @priyankachopra happy anniversary.