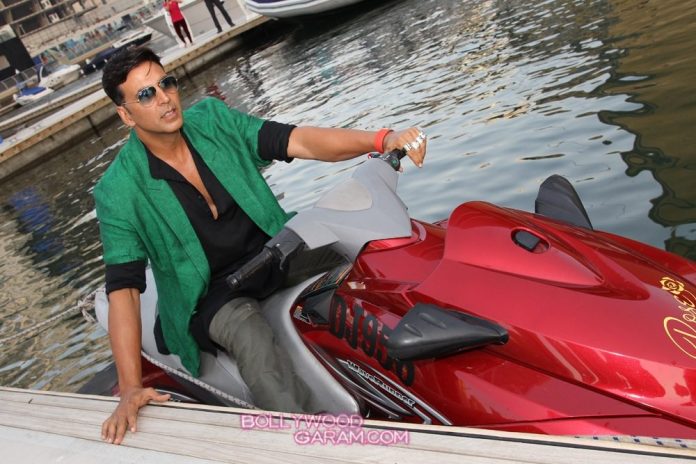 BollywoodGaram.com: Bollywood actor Akshay Kumar is always ready for action, even when it comes to the promotional duties for his upcoming action flick ‘Boss’. For his latest movie’s promotion, Kumar arrived on a jet-ski in order to address the media on a yacht on October 2, 2013. Akshay is well-known in the industry for showing off his athletic skills and doing his own stunts and the star always manages to entertain his audience.

The ‘Khiladi’ actor was accompanied to the promo event by his co-star, Aditi Rao Hydari and the famous rapper Honey Singh, who composed the song titled ‘Party All Night’ for the new movie. While in Dubai, Akshay is expected to launch another song from the movie, titled ‘Har Kisi Ko Nahi Milta’. The second song features Sonakshi Sinha, along with Akshay. The song has been taken from the original movie ‘Janbaaz’ and has been remixed for the upcoming movie.

‘Boss’ is an action thriller which is co-produced by Viacom 18 Motion Pictures, Ashwin Varde Productions and Cape of Good Films. The movie is all set to hit the theaters on October 16, 2013 and also stars Danny Denzongpa, Shiv Pandit, Ronit Roy and Johnny Lever.

The flick is directed by Anthony D’souza and is a remake of the Malayalam movie ‘Pokkiri Raja’, which featured the south star Mammotty and Shriya Saran.