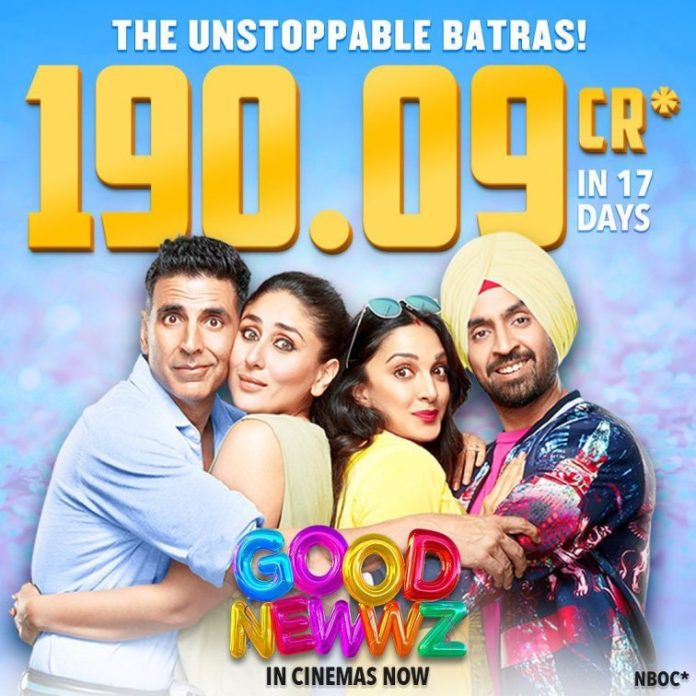 Akshay Kumar and Kareena Kapoor starrer Good Newwz is a story about a major goof up that happened at an infertility clinic while conducting IVF (In-Vitro fertilization) on two of the couples. The film managed to impress the audience and has managed to cross the Rs. 300 crore mark worldwide. Proud producer Karan Johar informed about the progress through social media.

The film also stars Diljit Dosanjh and Kiara Advani. Aksahy and Kareena play the role of the sophisticated Batra family while Kiara and Diljit play the louder Batra family. After 18 days of its release, the film collected Rs. 190 crores at the box office in India.

The film has also marked the fourth film of Akshay to hit the Rs. 100 crore mark at the box office. Akshay is all set to be seen in the upcoming film Sooryavanshi. The actor has faced success with the films like Mission Mangal, Kesari and Housefull 4 released in 2019. Sooryavanshi is an upcoming cop flick by director Rohit Shetty, who has earlier given the hits like Simmba and Singham films.

Akshay is also due to be seen in the upcoming flick Laxxmi Bomb and will also be seen in Prithviraj. After the success of Good Newwz, Akshay thanked his fans for their support.