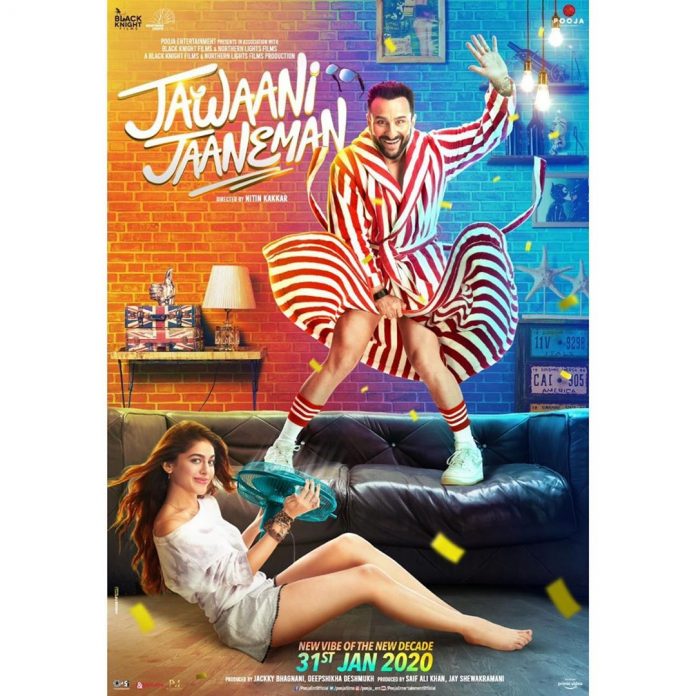 The much awaited film marking the debut of Pooja Bedi’s daughter Alaya Furniturewala has been released in theatres. The trailer looked interesting Saif is seen playing a 40 year old Casanova, who suddenly comes across his daughter at a point when he is enjoying a life as a single man partying and having fun. Here comes Alaya who, is his 21 year old daughter Tabu is her mother.

Most of the plot has been revealed in the trailer but the film does have many more moments. There is a modern idea given to the film with a no-judgement philosophy. Saif has done what he does the best and has done justice to what he has been given. Alaya has proved herself worth with her debut and has also shown her potential to be a star of the future. She is refreshing, expressive and confident. Watching Tabu in a completely different role as a hippy and the mother of Alaya is a delight. She was last seen in Drishyam and this character was completely different.

The thing that Jawaani Jaaneman lacks is a proper screenplay. There are many places where the happenings in the films lack logic and sense. There are many light hearted moments that can be enjoyed by the audience. There is also a supporting cast that includes Chunky Pandey, Farida Jalal, Kiku Sharda and Kumud Mishra, who are also known for their skills, but have a poor screen presence all because of poor writing. Kubra Sait is one character, who has managed to pull her part with least efforts.

The film is surely entertaining due to the one-liners and jokes that make sense. Overall, a good attempt by the debutant Alaya, who has done her best and is also an eye candy throughout.