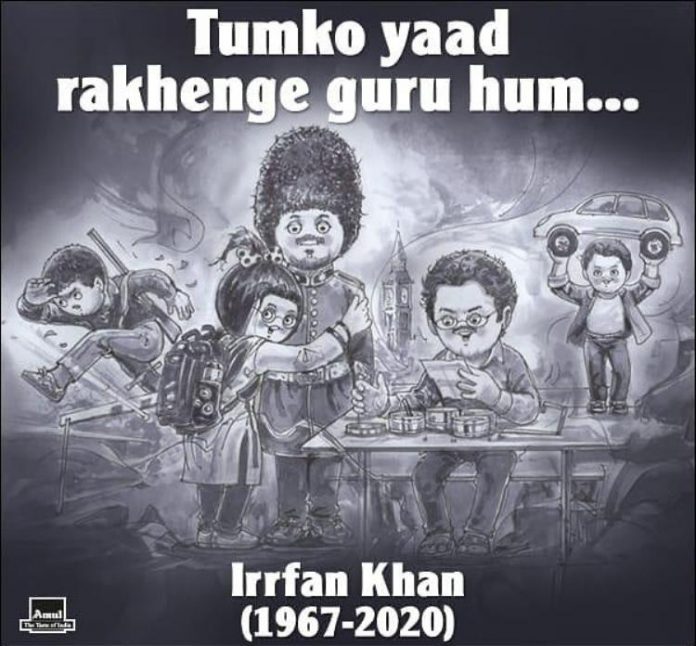 Indian dairy giant Amul is known for its advertising campaigns which includes its famous Butter Girl. This time the daily cooperative body paid tribute to late actor Irrfan Khan who succumbed to colon infection and was cremated on April 29, 2020. The new recent poster by Amul saw Irrfan Khan in different characters from some of his remarkable films like Angrezi Medium and Lunch Box while the Butter Girl can be seen in the character of Radhika Madan.

Some of the other remarkable films of the actor include Piku and Paan Singh Tomar which have also been included in the new Amul poster. Irrfan in an earlier interview had expressed that he has enriched each and every part of his career as an actor and would like to be an actor again.

The Madaari actor suffered from neuroendocrine tumour and was being treated at a facility in London and had returned to India to shoot for his film Angrezi Medium. Irrfan was admitted to a Mumbai hospital on Tuesday and was under observation for colon infection.

Due to the lockdown situation, the funeral was attended by only the immediate family members and close friends and was cremated at the Versova Kabristan in Mumbai on April 29, 2020. Fans and well-wishers had expressed grief and shock over the death of the actor.