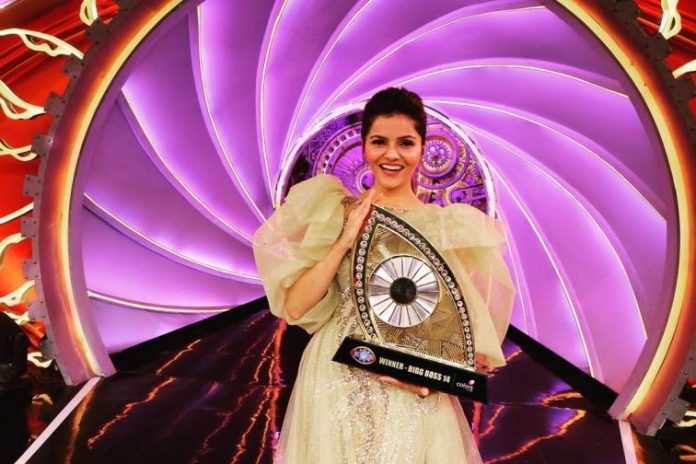 TV actress Rubina Dilaik lifted the winning trophy of the 14th season of the popular reality show Bigg Boss. The finale of the season was aired on February 21, 2021 and Rubina walked away with the total prize money of Rs. 36 laks. The actress was a part of the finalists including Nikki Tamboli, Rahul Vaidya, Rakhi Sawant and Aly Goni.

The finalists at a point were given an option to walk away with Rs. 14 lakh and that was claimed by Rakhi Sawant through a buzzer round. With that Rakhi was out of the winner’s race and she did not expressed any regret saying that she would utilize the prize money for the treatment of her ailing mother at the hospital.

The show saw all the contestants of the show along with the host Salman Khan. Rakhi gave a scintillating performance to her song Pardesia and burned the dance floor. Love birds Aly Goni and Jasmin Bhasin too gave a sizzling performance during the finale. The two had confessed that they fell in love on the show.

During the final moments, Rubina and Rahul were seen doing the honors of switching off the lights of the house of Bigg Boss as the season comes to an end. Rubina garnered fame with her roles in the TV series including Chotti Bahu and Shakti: Astitva Ke Ehsaas Ki.