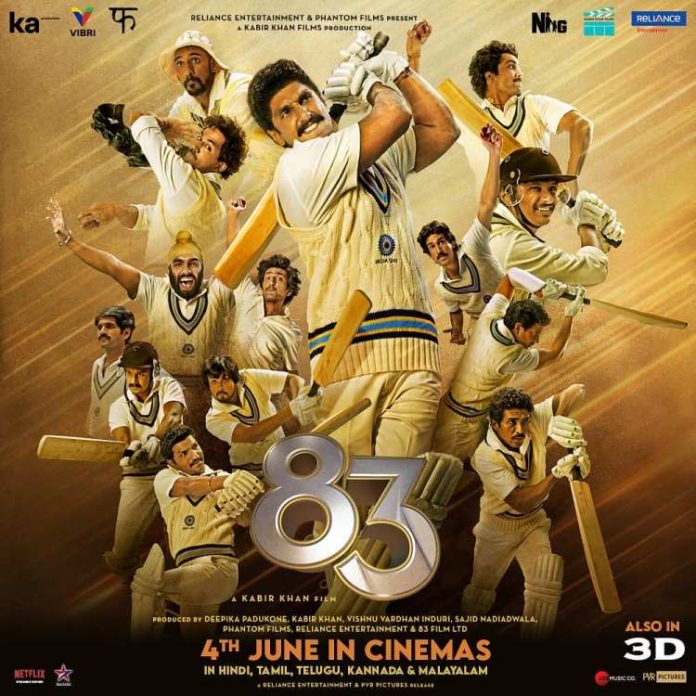 As the release date of the much awaited film 83 fast approaches, the makers have dropped the official teaser. The trailer is all set to be launched on November 30, 2021.

Talking about the teaser, it begins with grey-scale visuals of the glorious day that was marked in gold in the history of Indian cricket. The date was June 23, 1983 and the venue was Lords Stadium, London that was packed with cheering and anxious audience.

The teaser ends with Kapil Dev almost catching the ball that had marked the significant victory of the Indian cricket team after the dismissal of Vivian Richards. India had won the World Cup in 1983 while defeating West Indies.

The film has Ranveer Singh play the role of Kapil Dev and for the much excitement of the audience Ranveer’s real life wife Deepika Padukone will be seen playing the role of Kapil Dev’s wife Romi Dev. 83 is expected to be released in a number of languages including Tamil, Hindi, Telugu, Kannada and Malayalam. The makers had started to film in the sports drama in 2019 and it was earlier expected to be released in April 2020. But the release was shifted to Christmas due to the coronavirus pandemic. After a number of changes in the release date, the film is now ready to be released on December 21, 2021.