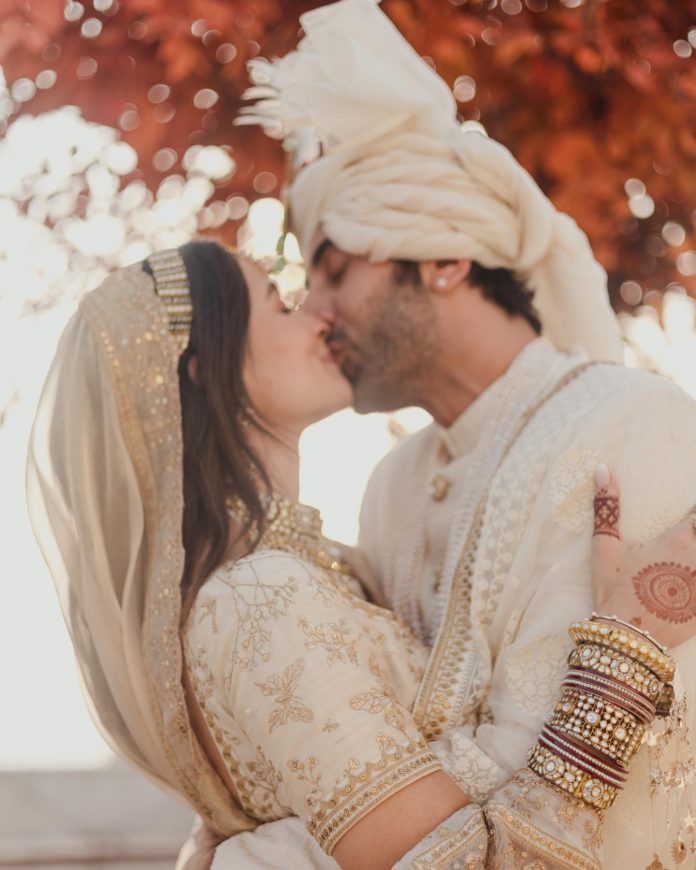 The much awaited wedding of the Bollywood couple Alia Bhatt and Ranbir Kapoor took place on April 14, 2022 in Mumbai. The wedding celebrations started off as a hush-hush plan, with the family members maintaining a silence over the details, but then Alia Bhatt and Ranbir Kapoor broke the news to the world by posting a few dreamy pictures from their intimate wedding ceremony.

As per the pictures, the couple looked ethereal in their outfits and also greeted the media outside their residence. The Student of The Year actress posted the pictures and wrote that they got married at the balcony where they spent majority of their time while in a relationship and have now sealed it at their favourite place.

Alia’s brother Rahul Bhatt shared that the couple took 4 pheras (promises) instead of 7 as a part of the ceremony. As soon as the news broke, congratulatory messages started to pour in from fans, well-wishers and colleagues across the country and abroad.

Alia looked gorgeous in an ivory sari with golden jewellery while Ranbir matched with his bride in an ivory sherwani with a turban to match. Intimate pictures from the wedding are slowly being circulated on the internet. Going by the pictures Kareena Kapoor, Karisma Kapoor, Karan Johar and others were seen enjoying the ceremonies.