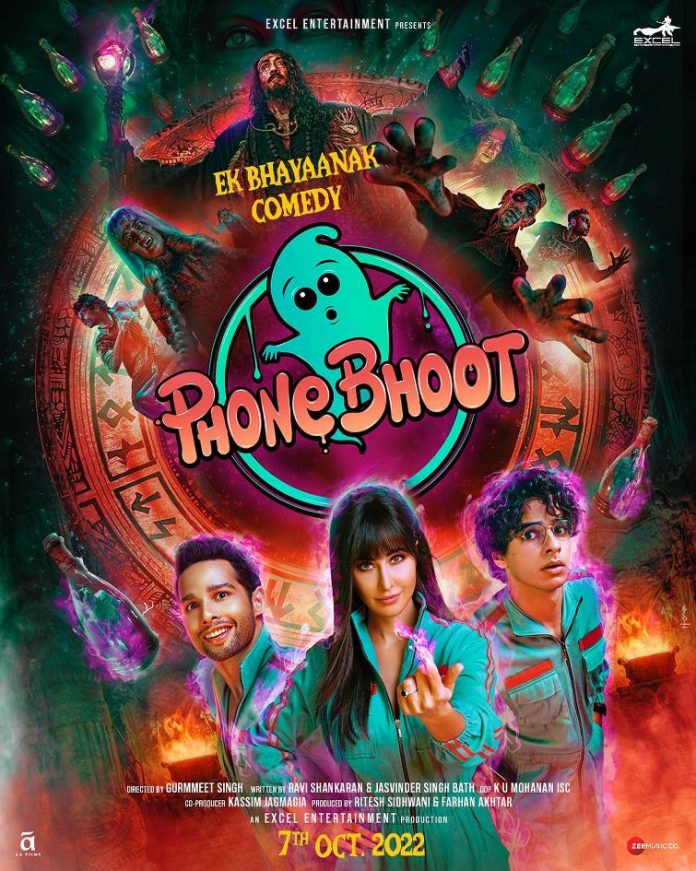 Makers of the upcoming horror comedy flick Phone Bhoot have dropped the first official look on June 28, 2022. The film stars Katrina Kaif, Siddhant Chaturvedi and Ishaan Khatter. It has been a year ever since the makers had announced about the film and since then there has been a curiosity among the audience.

Producer Farhan Akhtar shared the official poster of Phone Bhoot and also announced the release date. The film is all set to be released in theatres on October 7, 2022. Katrina in the poster can be seen with Ishaan and Siddhanth. The poster also features Sheeba Chaddha, Jackie Shroff, Nidhi Bisht and Surender Thakur as the ghosts in the background.

The upcoming film is helmed by Gurmmeet Singh and is written by Jasvinder Singh Bath and Ravi Shankaran. Phone Bhoot is backed by Excel Entertainment and is all set to be released in theatres on October 7, 2022.

Katrina was last seen in the film Sooryavanshi in which she played the role of Dr. Ria Gupta opposite Akshay Kumar. This will mark her first release after her wedding with Vicky Kaushal. Apart from Phone Bhoot, Katrina is also due to be seen in the upcoming films Merry Christmas and Tiger 3. Tiger 3 also stars Salman Khan and is from the Tiger franchise.