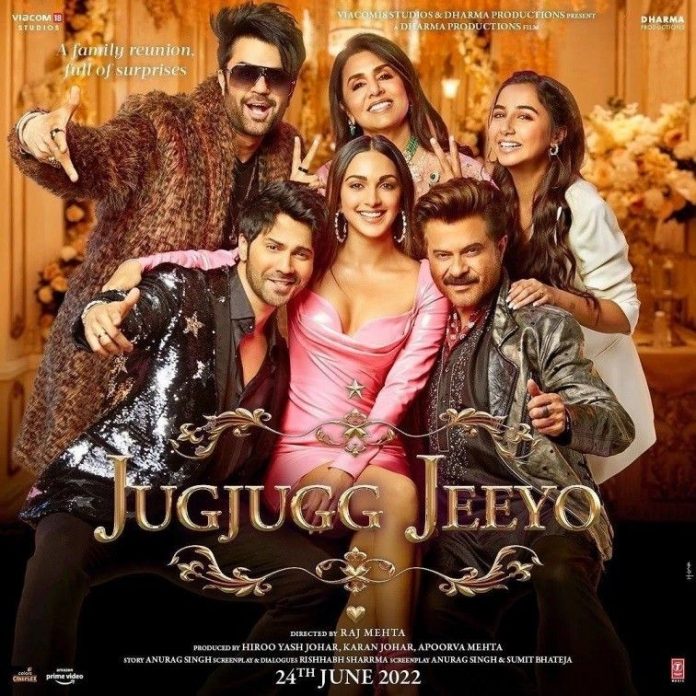 Movie Name: Jugjugg Jeeyo
Cast: Anil Kapoor, Neetu Kapoor, Varun Dhawan and Kiara Advani.
Director: Raj Mehta
Genre: Comedy-drama
Running time: 150 minutes
Bollywood Garam Rating: 3.5 out of 5 stars
Director Raj Mehta has come up with a family entertainer that has marked the debut of popular YouTuber Prajakta Koli. The story begins with the love story of Kukkoo played by Varun Dhawan and Nainaa Sharma played by Kiara Advani, who are childhood sweethearts. The two get married and relocate to Canada. However, their love does not last long and they end up being unhappy in each other’s company just five years in to their marriage.

Kukkoo and Nainaa decide to part ways, but then Kukkoo’s sister Ginny’s (played by Prajakta Koli) marriage is fixed. The couple decides that they would remain silent till the wedding is solemnized and would later break the news to their respective families. This is when the actual drama and fun begins. It can be said that Anil Kapoor and Neetu Kapoor have grabbed all the attention with their grace. Anil looks incredibly promising as a Punjabi father, who falls in love with his son’s mathematics teacher.

Neetu Kapoor could not have been more promising as the Punjabi mother with traditional values and thoughts. Manish Paul, who plays the role of Kiara’s brother has added his own element of entertainment with some witty dialogues. Tisca Chopra, who plays Meera Malhotra (Varun’s Mathematics teacher) does not have much to add to the film, but her grace and charm is enough to make Jugjugg Jeeyo complete.

When you have an overall look at the film, it can be safely said that Anil Kapoor and Neetu Kapoor have dominated their presence and have managed to entertain the audience most of the time. Varun and Kiara could not display much of their chemistry, as they were most of the time not in good terms and were together only at the beginning and at the climax. This could have been the minus point for the film.