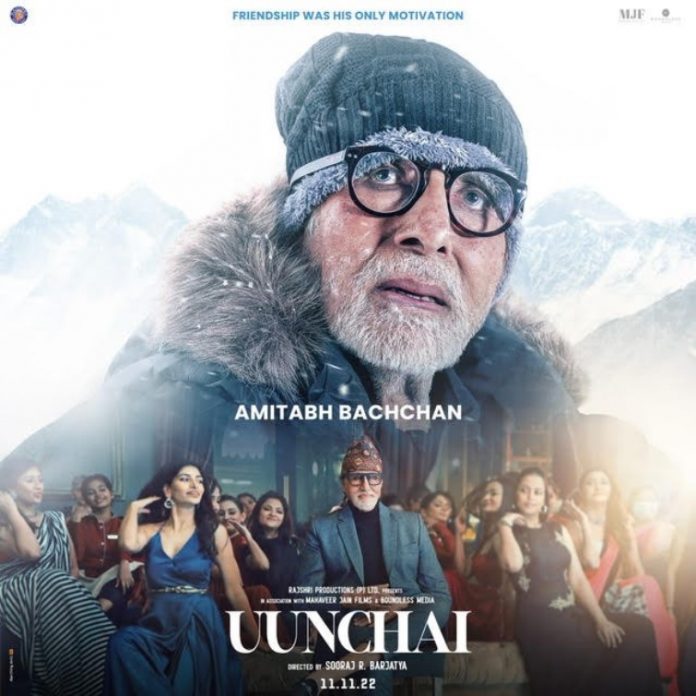 Superstar of Bollywood, Amitabh Bachchan is all set to be seen in the upcoming film Uunchai. The makers of the film released a character poster just a day before the megastar is all set to celebrate his 80th birthday on October 11, 2022. The film is ready to be released in November 2022 and so far the makers have only released a few posters.

Uunchai also stars Boman Irani and Anupam Kher playing lead roles. Mr. Bachchan shared the new poster of the film and introduced the character of Amit Shrivastava. The poster has shown Mr. Bachchan with an intense look with snow burns on his face with a snow covered background that has mountains.

The makers had released the first poster of Uunchai on Friendship Day 2022 and had introduced the first looks of Amitabh Bachchan, Boman Irani and Anupam Kher. The three were seen sitting at the backdrop of snow clad mountains. Mr. Bachchan had earlier given an idea that the film is about an adventure of three friends in to the mountains.

The film also stars Sarika, Parineeti Chopra and Neena Gupta apart from Danny Denzongpa and Nafisa Ali Sodhi. Uunchai is helmed by Sooraj Barjatya under the popular Rajshree Productions and is ready to be released in theatres on November 11, 2022.