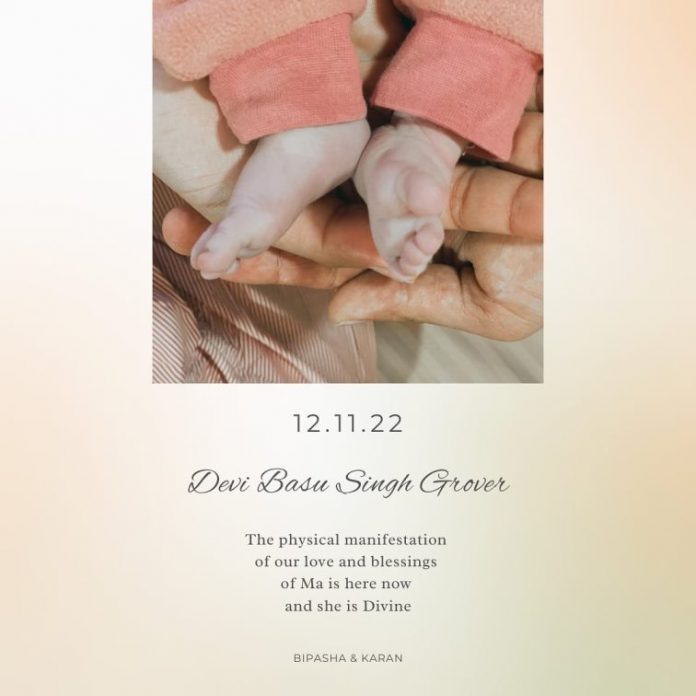 Bollywood couple Bipasha Basu and Karan Singh Grover has been blessed with a baby girl on November 12, 2022. The couple shared the happy news through an Instagram post and also revealed that they have named her Devi Basu Singh Grover.

Karan and Bipasha also went on to share a picture of their little bundle of joy. The picture showed the baby’s tiny feet as the new parents held the child. After a few days of being in the hospital, Bipasha and Karan were seen taking their baby home.

Bipasha was seen in a black and white outfit with a pair of trendy sunglasses while Karan was seen in all-black casuals and a pair of white sneakers. Little Devi was seen wrapped in a pink wrap while Bipasha carried the little one without revealing her face.

Bipasha and Karan got married in 2016. They had fallen in love after they met on the sets of the film Alone. The two welcomed their first child after six years of marriage. On the work front, Bipasha was last seen in the film Alone in 2015. A year later Bipasha got married to Karan and ever since then the actress has not been very active in the entertainment industry. On the other hand Karan is working on an upcoming film with the name 3 Dev.