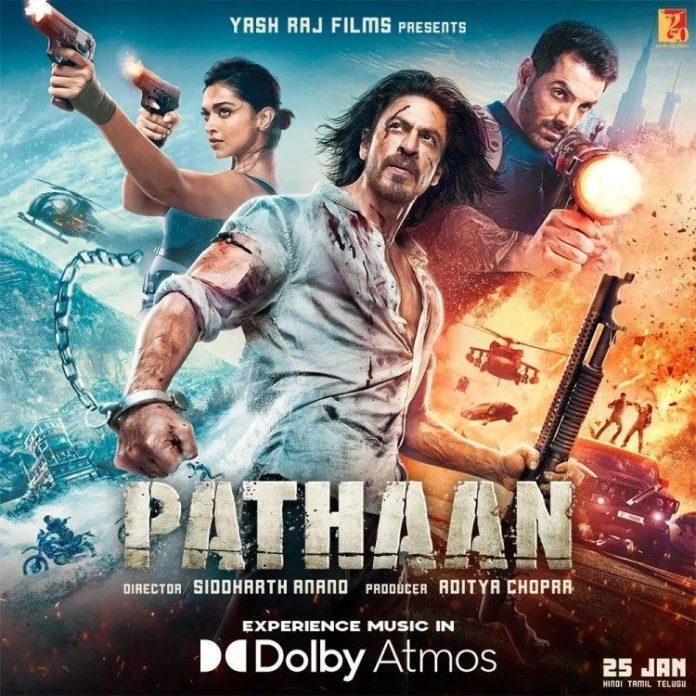 Upcoming Bollywood film Pathaan seems to be in more trouble after being in news for the bikini worn by Deepika Padukone in the song Besharam Rang. Members of the right-wing group Bajrang Dal protested against the upcoming Shah Rukh Khan and Deepika Padukone starrer film while destroying posters of the movie at a mall in Ahmedabad, Gujarat.

Two videos of the incident were shared on an unverified Twitter account. The videos posted on social media had shown the members of the group creating a commotion at the movie theatre premises as they shouted slogans. Many of the mall officials were seen trying to persuade them to stop. The members have threatened the theatre owners of dire consequences if they release Pathaan.

Another video that was posted had showed a few people shouting outside the mall while abusing the actor and appealing to boycott the film. The controversy surrounds around the song ‘Besharam Rang’ from the film that has shown Deepika Padukone and Shah Rukh Khan romancing in Spain. After the uproar caused many people including politicians have demanded a ban on the film as they feel offended by the contents of the song.

After the outage, the Central Board of Film Certification has directed the filmmakers to apply a few changes in the film that includes the songs. The film is due to be released in theatres on January 25, 2023.