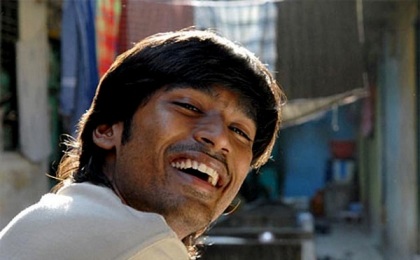 Popular South Indian actor Dhanush is all set to debut in the upcoming movie ‘Raanjhanaa’, in which he will be starring opposite Sonam Kapoor. The actor admitted that he is finding the experience difficult due to a change in language, but is still trying to give his best.

On his Twitter page, Dhanush wrote, “Dubbing for Raanjhanaa. (I’m) finding it quite tough. (I) hope I can live up to your expectations. (I) will give my best”. The actor is paired opposite Anil Kapoor’s daughter and the movie tells a love story between a Muslim guy and a Hindu girl.

The movie is directed by Anand L. Rai and also features Abhay Deol and Swara Bhaskar in important roles. The flick will be produced by Eros international and will be released on June 21, 2013. The music for the movie has been composed by Oscar-winning composer A.R. Rahman. The movie will also be dubbed in Tamil and will be known as ‘Ambikapathy’.

Both Tamil and Hindi versions of the movie will be released soon. On the other hand, Dhanush is also awaiting the release of his forthcoming movie ‘Mariyaan’, which will be a Tamil romantic-drama. In the movie, Dhanush will be seen playing the role of a fisherman held captive in Sudan.