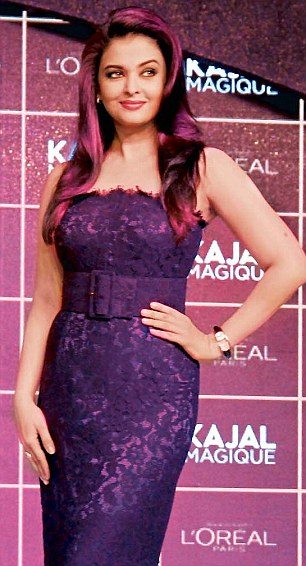 BollywoodGaram.com: For almost a year, Bollywood actress Aishwarya Rai has been dealing with criticism for her post-baby fat. However, as 2013 is coming to an end, the ‘Dhai Akshar Prem Ke’ actress has managed to silence all critics when she appeared looking slim and beautiful at the launch of L’Oreal Paris’s first kohl in Mumbai.

The mother of a two-year-old daughter was seen in a Dolce & Gabbana strapless gown, with a matching belt and a black blazer. The last time the Bollywood star was spotted in a strapless gown was at the 64th Annual Cannes Film Festival in 2011. Since then, Rai has been sporting heavy outfits in order to conceal a few extra pounds.

Despite all the criticism the actress received, the Bachchan family and the ‘Dhoom 2’ actress remained silent and did not react to any of the comments. The Bollywood beauty took her time to get back into shape and maintained a simple and radiant look during all her public appearances.

This time, the actress opted for smoky eyes, which made her look simply radiant. The former beauty queen is the face of the company’s Kajal Magique campaign. Ash during the event said, “Eyes are the windows to the soul and Kajal Magique from L’Oréal Paris is the perfect way to highlight them.” The new cosmetic product unveiled is rich in ingredients like Vitamin C and cocoa butter and is priced at Rs. 245.