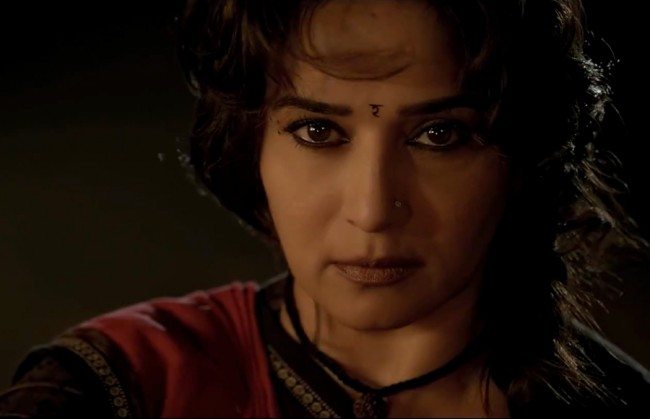 BollywoodGaram.com: The makers of the Bollywood movie ‘Gulaab Gang’ recently released an official trailer on YouTube, which has already surpassed 1.5 million hits on the site. Filmmaker Anubhav Sinha took to his Twitter account and announced the achievement of the trailer video, which was released on January 10, 2014.

Sinha posted, “Is it okay to raise a toast in the afternoon? A toast to 1.5 million YouTube views of ‘Gulaab Gang’ trailer in four days”. The movie features Madhuri Dixit and Juhi Chawla, who play activists protesting against the social injustice against women in the central India’s Bundelkhand region.

In the movie, Madhuri will be seen in a completely different role and will also have action scenes, while Juhi will be playing the role of a politician. The movie is inspired by the ‘Gulaab Gang’, which was first started by activist Sampat Pal, who also appeared on the show ‘Bigg Boss’.

The lady started her fight alone, but now has a huge gang of women who wear pink saris and outfits and fight against injustice done to women. The movie is directed by Soumik Sen and is co-produced by Sahara Movie Studios and Bharat Shah. ‘Gulaab Gang’ is all set to hit the theaters on March 7, 2014.