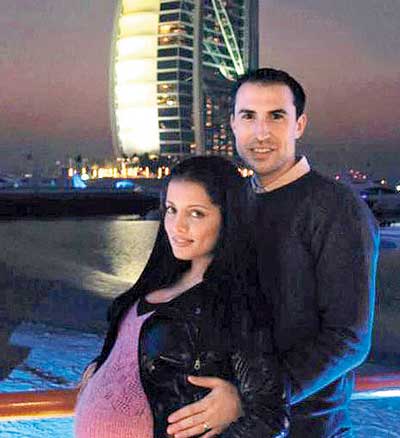 Bollywood actress Celina Jaitley, who recently announced that she is expecting twins, has flaunted her baby bump. Jaitley and husband Peter Haag are expecting their first pair of kids and is expected to deliver in the month of April 2012.

Jaitley and husband Peter Haag posed for a picture in front of the hotel Jumeirah in Dubai. The couple spent the Christmas season in Dubai and posted a picture while they greeted everyone.

After denying marriage rumours, in 2010 December, the actress announced that she got married on July 23, 2011 with Peter, who is a Dubai based Austrian based businessman, hotelier and marketer. The two got married in a thousand year old monastery in Austria.

The two got engaged in January 2010 and has now flaunted her baby bump while she posed with husband Peter in front of the popular hotel. Jaitley became popular after she came first at the Femina Miss India in the year 2001. Apart from the title she also won the Miss Margo Beautiful Skin and MTVs Most Wanted Award. Jaitley made her debut with Feroz Khan’s ‘Janasheen’ opposite Fardeen Khan, but unfortunately the movie failed to take off at the box office. The actress then continued to do more films in Bollywood.