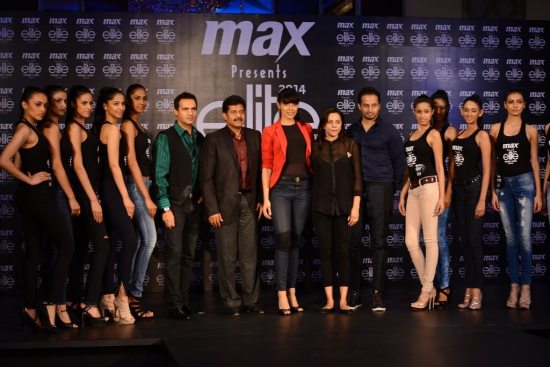 One of the country’s largest fashion forward brand MAX has partnered with the Elite Model Look India 2014 (EML), which marks its debut in India this year. Models were shortlisted across five key cities, namely, Chandigarh, Delhi, Mumbai, Bangalore and Kolkata, who then walked the ramp for national casting on September 21, 2014 at Hotel Sofitel, Mumbai.

Prominent personalities present at EML included Marc Robinson, designer Gaviin Miguel and model Dipti Gujral. A total of 20 models were selected at the national casting to undergo grooming sessions with industry fashion gurus to prepare for the grand finale, scheduled to take place in October 2014.

The winners of the grand finale will represent India at the international finale in China and secure a three-year contract with the Elite agency.

This contest offers thousands of boys and girls across India the opportunity to follow in the footsteps of top international models such as Cindy Crawford, Stephanie Seymour, Gisele Bundchen, Sigrid Agren and Constance Jablonski.

The criterion of EML include ramp walk, first impression and photogenic appeal, which were judged by prominent fashion personalities and Executive Director of Max, Vasanth Kumar.

Max, a division of Lifestyle International, has pioneered the concept of ‘value fashion’ in the country, thereby offering the discerning shopper a vast choice with international fashion and quality.

Elite Model Management is the world’s largest model agency, representing over a thousand models across five continents. It is home to many of the leading faces of today, such as Adriana Lima, Liu Wen, Sigrid Agren, Constance Jablonski, FeiFei Sun and Ming Xi.