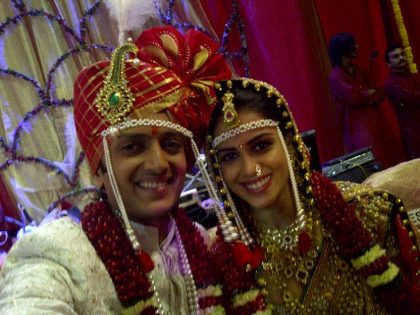 The cutest couple of Bollywood Genelia D’Souza and Riteish Deshmukh have finally tied the knot in a grand wedding ceremony in Mumbai. The rituals were held in traditional Marathi tradition and was attended by the biggies of Bollywood including Abhishek Bachchan, Shahrukh Khan, Jaya Bachchan, Ajay Devgn, Kajal and others.

Actor Shahid Kapoor from the wedding Tweeted, “ And G is married !!!!!!!!!! Unbeleivable,”. The wedding ceremony today on February 3, 2012 is expected to draw huge crowd from the film as well as politics.

Genelia, who is known to be religious was noticed with her pre-bridal glow. Riteish and Genelia wore the best traditional outfits at the sangeet ceremony, everyone from the film fraternity had a blast. The actress was seen dancing her heart out at one of the rituals. On January 24, a party was hosted specially for the couple by close friends Fardeen Khan and Sajid Nadiadwala. Riteish and Genelia, first met on the sets of ‘Tujhe Meri Kasam’ after which their love story continued without letting anyone know.