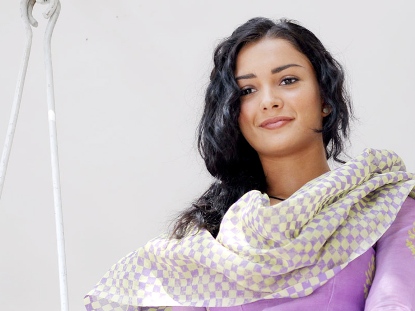 Amy Jackson, is the latest entrant in Bollywood, who will soon be seen in a film opposite Prateik Babbar. The winner of Miss Liverpool 2010 started acting with ‘Madrasapattinam’, a period drama in Tamil language.

Amy will now be seen in the upcoming movie of Gautham Menon ‘Ekk Deewana Tha’. The British actress will be seen playing the role of Jesse, who is a Christian from Kerala.

Jackson while talking about the movie said that she had to go through a major transformation procedure for the role. The actress revealed that she wore Indian dresses for a month so that she gets comfortable while shooting.

The actress also had to wear brown contact lenses, which was also another thing she had to get used to. Overall, Amy had to change many things within her in terms of style, mannerism and speech which was the biggest challenge for her during the shoot. Jackson said that her favourite scene was the Taj Mahal scene, which was also her first visit to Agra. While talking about Prateik the actress said that she has seen his performance in ‘Dhobi Ghat’ and that it is a great opportunity for her to work with him on her debut.