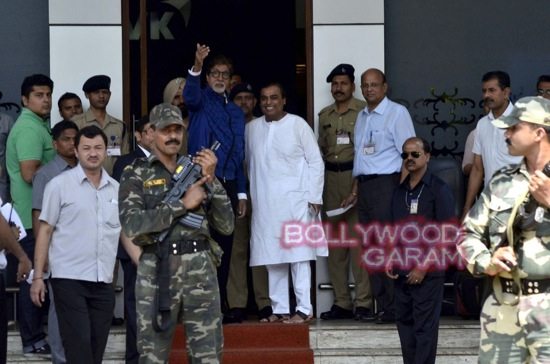 Celebrities Amitabh Bachchan, Mukesh Ambani and others leave for ISL match in Kolkata.

Superstar of Bollywood Amitabh Bachchan and Indian business tycoon Mukesh Ambani were seen leaving for Kolkata to attend the opening ceremony of the Indian Super League on October 12, 2014. Amitabh attended the ISL opening ceremony to show support for son Abhishek Bachchan, who is the co-owner of the team Chennaiyin FC.

Mukesh Ambani’s son, Aakash Ambani, and Indian composer Anu Malik were also seen at the airport. The opening ceremony of the ISL was held at Kolkata and was attended by high profile people in politics, sports and Bollywood on October 12, 2014.

The opening match was played between Athletico de Kolkata and Mumbai City FC, in which Kolkata emerged victorious. The Kolkata team is co-owned by ‘Dada’ Sourav Ganguly, while Ranbir Kapoor co-owns the Mumbai franchise.