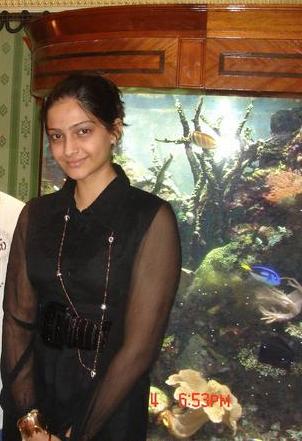 Bollywood Garam: Bollywood actress Sonam Kapoor may have launched her career with the infamous movies “Saawariya” and “Delhi-6”, not many people know that she was around 90kgs before becoming a part of Bollywood. Surprised? Well don’t be! It seems that she had a problem in maintaining her weight due to her obsession with food. Later on, when the daughter of actor Anil Kapoor decided that she wants to enter Bollywood, the “Aisha” actress shed more than 25 kilos to look “thin”. Fans really are amazed by the radical weight loss, but despite this big feat, many critics feel that Sonam has not taken care of her looks and the actress seems to be looking pretty ragged. We beg to differ!

In the picture above, Sonam maybe fat (left), but in her “thin” picture (right), we can see just how the youthfulness of her looks seems to be degrading as compared to the way she looked earlier. This does happen when a person loses weight and we’re glad Sonam is not going to extreme measures to alter her face, just because of what critics feel.

This photo shows the Real Sonam Kapoor – as she really looks without make-up, not so pretty many say. This is an indication of “true beauty”, right?

The critics suggestions? Some say Sonam needs to do something about those puffy eyes instead of adding eye makeup and covering it up. And maybe tone those arms? (below)

Update: Sonam has shown once again she doesn’t care about the critics and over the years, she has worked her way to become a top actress, who is not only physically fit, but also exudes confidence and style. Great job Sonam, you have come a long way!