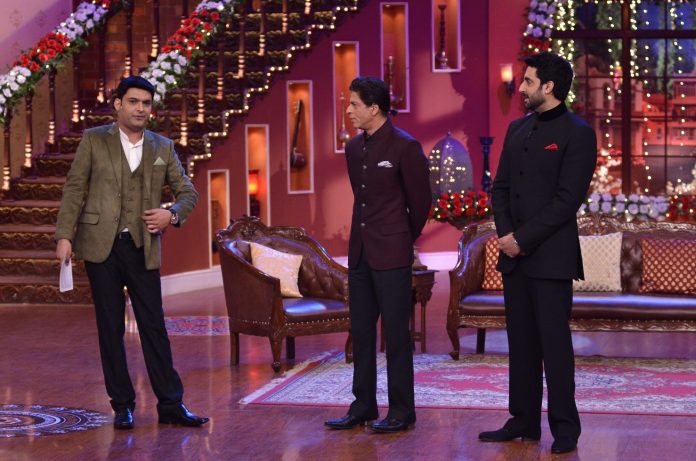 Shahrukh Khan along with the other cast promotes Happy New Year on Comedy Nights with Kapil.

The cast of HNY was on a hug and kiss spree, which first started with the pair Shahrukh Khan and Deepika. The cast made sure that they had fun and also made sure that the audience at the studio had fun too. Farah and Boman, who are always fighting, this time actually performed on a romantic number.

The funniest part was the face off between Farah Khan and Saroj Khan, which ended up in a cat fight. Actor Sonu Sood took off his shirt on the request of the audience, especially when Shahrukh said, “Ek cheque abhi tak baaki hai!” Even Deepika was requested to repeat the dialogue ‘Ek Chutki Sindoor Ki Kimat…”  from her first movie, ‘Om Shanti Om’. Vivaan also made his presence felt on the show when he showed off his hilarious dance moves.

Vivaan was then joined by the entire cast while the fans and the audience cheered them on. The cast of HNY recently promoted the movie in the SLAM tour in various cities of the US.