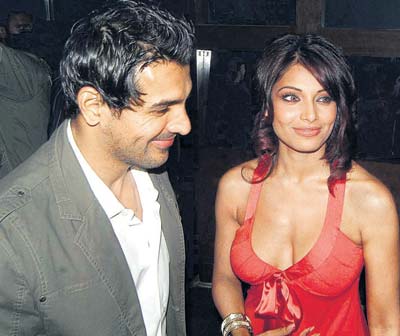 Bollywood Garam: Rumor mills are going overdrive over the alleged break-up of Bollywood hotties John Abraham and Bipasha Basu, although neither of the two celebrities have confirmed the news. Au contraire, Bips ( as the “No Entry” actress is fondly known) has told the media that she does not like such vague speculation and that her relationship with “Dosatana” star John Abraham is ‘smoking hot’.

So what gave rise to these widespread rumors? Fans state that the fact that Bipasha and John have not been seen in public for a long time, bear testimony to the fact that the couple have headed towards splitsville. Other reports allege that the actress said that they were too tied up with their work commitments in different locations, and hence cannot make appearances together. But the fans are not ready to believe this, and rumor even has it that a friend of John has said that the spark in the couple’s relationship is over and that John never speaks about Bipasha to any of his pals.

Once Bollywood’s hottest couple, and now termed the most ‘boring’ couple, makes us wonder if the sparks between the two have really ended after 10 years. Or if it’s just another publicity issue to create some hype for their upcoming movies. As always, time will tell!