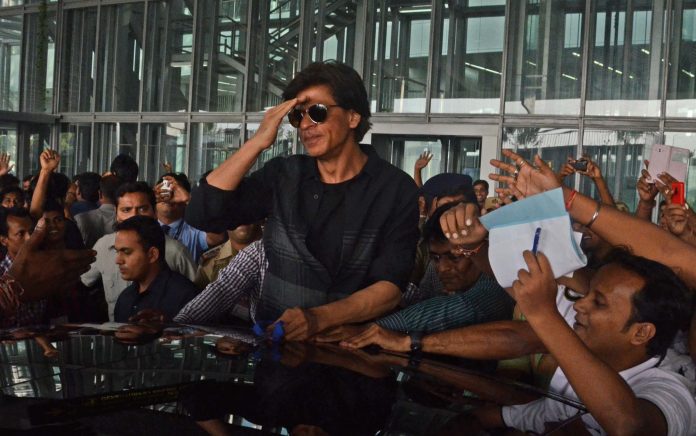 Bollywood actor Shahrukh Khan was mobbed at Kolkata Airport as several fans thronged the entrance of the airport on October 29, 2014.  The Baadshah of Bollywood and the entire cast of the movie ‘Happy New Year’ were in the capital of West Bengal to celebrate the success of HNY.

On wednesday, SRK had tweeted, “Off to Kolkata my favourite city. listening to Sharaabi. Here is a new link till things get sorted I guess.” The other stars that accompanied Shahrukh in Kolkata included Deepika Padukone, Abhishek Bachchan, Boman Irani, Jackie Shroff and Vivaan Shah. Shahrukh looked stylish in a black outfit.

HNY has broken all box office records and has gone on to become the highest grossing movie in Bollywood. On its first day, it collected Rs. 44.97 crores, which smashed the highest opening record that was held by ‘Dhoom 3’.