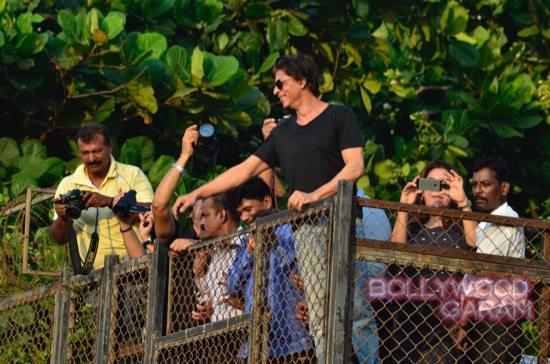 The Baadshah of Bollywood SRK celebrates his 49th birthday with fans in Mumbai.

Like every other year, Bollywood superstar Shahrukh Khan waved out to fans outside his residence in Mumbai, on his birthday. The actor turned 49 on November 2, 2014.

There were scores of fans waiting to get a glimpse of the Baadshah of Bollywood on his special day. This year has been fantastic for the actor, who is currently riding high on the success of his latest movie ‘Happy New Year’.

His wife, Gauri Khan, is said to have organized a special party to celebrate the success of ‘Happy New Year’ as well as King Khan’s 49th birthday. While addressing the media on his birthday, SRK said, “I don’t count age and I feel good and energized.”

Shahrukh is now the only Bollywood hero to be part of two movies that raked in more than Rs. 300 crores. The first one was Rohit Shetty’s ‘Chennai Express’, which released last year and this year it is ‘Happy New Year’. SRK said that he is looking forward to his next birthday, which will be more special since he would be turning 50.