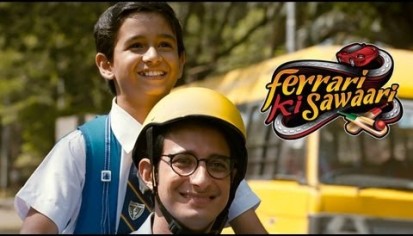 Bollywood Garam: The most happening film maker Vidhu Vinod Chopra – who has earlier given us some major hits like the ‘Munna Bhai’ series and ‘3 Idiots’ – is now back with his next venture. The makers have recently revealed the first trailer video of the upcoming movie ‘Ferrari Ki Sawari’.

The movie has Sharman Joshi, Boman Irani and Nilesh Divekar. This will be the first movie for Sharma Joshi in which he will be playing the role of the lead actor. In ‘3 Idiots’, the actor had played the supporting role along with Aamir Khan and R Madhavan.

‘Ferrari Ki Sawari’ is directed by Rajesh Mapuskar and is written and produced by Vidhu Vinod Chopra. Another major attraction in the movie is actress Vidya Balan’s item song where she will be seen performing on traditional Lavani folk dance.

The song is titled ‘Mala Jau De’ and the ‘Kahaani’ actress will be seen in a traditional Maharashtrian attire.

The story of the movie is about a eight year old boy’s dream to play at the Lord’s some day. The makers admitted that he had looked at more than 1000 boys while scouting for the little actor for the movie. Vinod said that he had went up to the cricket academy in Dehradun to search for an appropriate actor.