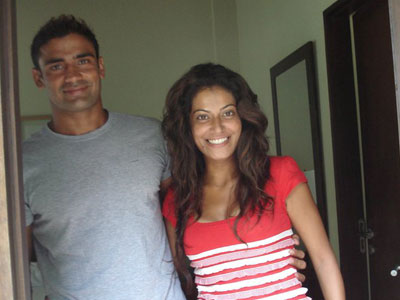 Bollywood Garam: Actress Payal Rohatgi has been in the news for all the wrong reasons in the past, but it seems like things might have changed as she and her beau wrestler Sangram Singh have recently bought a new house in Mumbai. Payal and Sangram met during TV reality ‘Survivor India’ which recently concluded. But that’s just the upside, the downside was her latest eye-popping wardrobe malfunction at the Mirchi Music Awards where fans saw more than expected.

The two have purchased a four bedroom flat, which is worth Rs 4.5 crores, in Versova area in Mumbai. While talking about the recent development, the actress said that it is like a dream come true and that she always wanted to have a sea-facing house of her own since the time she came to Mumbai.

Rohatgi revealed that she has completed a full circle from living as a paying guest, to living in a rented house and now owning a terrace apartment in Mumbai. As of now, the interiors of the house are being done and the much in love couple expect to move in to their new nest by next month.

Payal – who has earlier participated in the other reality shows like ‘Bigg Boss’ and ‘Khantron Ke Khiladi’ – added that the interior of the house is being done according to her choice as she is the lady of the house.

The “36 China Town” actress also said that she wishes to give her mother a surprise as she will be coming to stay with her in the summer.

Besides her new house and new man, she is also in the news for her latest wardrobe malfunction at the Mirchi Music Awards ceremony, where her outfit for the night revealed not only her back, but also seemed a little small in covering her assets in the front.