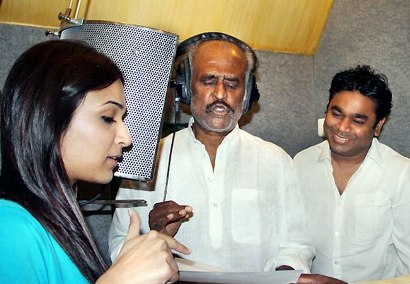 BollywoodGaram.com: In some exciting news for fans of south Superstar Rajinikanth, the veteran star has sung in Hindi for the very first time and the person who made the super star sing was none other than A R Rahman. Rajinikanth had originally sung the Tamil song for his daughter Soundarya’s movie ‘Kochadaiyaan’.

Dr. Murli Manohar, the producer of Kochadaiyaan, while talking to reporters said that Rajini and Rahman came together for Rahman’s composition and that the super star had earlier sung the Tamil version of ‘Kochadaiyaan’. The producer clarified that the earlier song is completely different from that of the Hindi version. Coincidentally, the Hindi version of ‘Kochadaiyaan’ is supposedly different from its Tamil version and so are the songs.

Popular lyricist Irshaad Kaamil, who has written songs for movies like ‘Rockstar’ and ‘Love Aaj Kal’ has penned the lyrics of the song. The song narrates the complicated imagery of life and morality and has several Urdu words. This was the reason Rajinikanth was initially skeptical about pulling it off.

The last time Rajini sang was for the Tamil movie ‘Mannan’ for the song ‘Adikuthu Kuluru’. A picture of Rajini along with Rahman in the recording studio has also been released, which shows the super star singing his heart out while Rahman and Soundarya are helping him.

Seems like the actor has got some inspiration from his son-in –law Dhanush, who broke all the records with the song ‘Kolaveri Di’ from the movie ‘3’. Dhanush just came up with some random lyrics and hit the recording studio where the song was recorded. The video of the making of the song leaked on the internet before it was supposed to be released and became an instant hit with the people around the world.