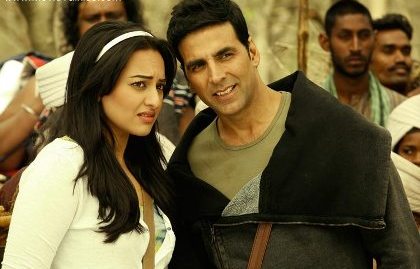 The news was confirmed by Sonakshi’s brother Luv on Twitter, “Its official! @sonakshisinha is part of one of the films I’m looking forward to watching the most. ONCE UPON A TIME IN MUMBAI..AGAIN,”. Bollywood Garam sources stated that Kareena Kapoor and Kangana Ranaut were approached for the role before Sinha.

For Sonakshi, this will be the third venture with Akshay. The actress earlier teamed up with Kumar for Shirish Kunder’s ‘Joker’ and Prabhu Deva’s ‘ Rowdy Rathore’ . Both the movies are expected to be released this year.

The sequel of the movie ‘Once Upon A Time In Mumbaai’ will be directed by Milan Luthria and will have Akshay Kumar, Sonakshi Sinha and Emraan Hashmi in the lead roles. Akshay will be playing the role of the character Shoaib, from the underworld don Dawood Ibrahim’s kingdom.