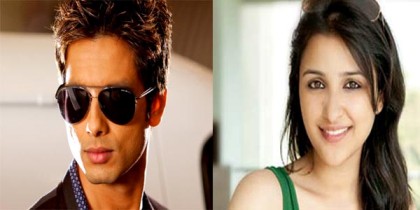 It is now a known fact the Bollywood actors, Priyanka Chopra and Shahid Kapoor are no more in a relationship and have called it quits. Though they have reportedly moved on , reports say that Shahid has recently signed a project to work opposite Priyanka’s cousin Parineeti Chopra.

Bollywood Garam sources say that the movie will be directed by Maneesh Sharma, who had made the movie ‘Band Baaja Baraat’. The director is reportedly impressed by Parineeti and her acting skills.

Meanwhile, Chopra who starred in the movie ‘Ladies Vs Ricky Bahl’, has already been tagged as the most bindass girl in Bollywood. Her first movie was impressive enough and even the promos of her upcoming movie ‘Ishaqzaade’ are also showing the actress as a promising skill for the industry.

In the upcoming movie with Shahid Kapoor, the actress will be seen in a feisty role and will be the third leading lady. Earlier the role was offered to Rani Mukherjee, but now it is likely that actress Tabu will be seen in the movie. It will be interesting to see the onscreen chemistry of Parineeti and Shahid.