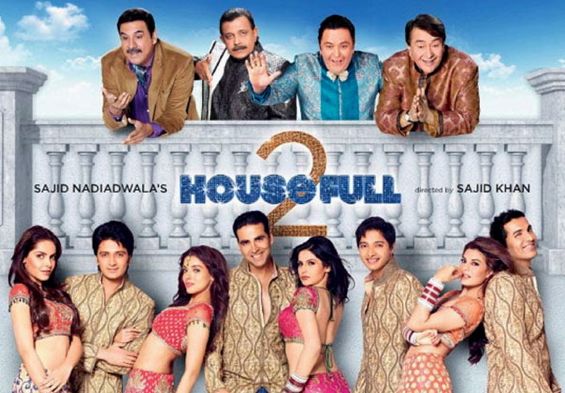 Bollywood Garam: The much awaited multi-cast Bollywood movie ‘Housefull 2’  has finally been released on April 6, 2012. The Sajid Khan-branded comedy and entertainment film has received mixed reviews and viewers can either return satisfied from theatres or just wish they erased the movie from their heads.

As far as the story is concerned, it does not seem to matter as entertainment is what actually matters to the audience, or atleast this is what the makers thought, and did they get it wrong!

Just for names sake, there are multiple characters who do not get along with each other and end up in the same house, only to create a blast.

The director has made sure that he has made everything loud, silly, crass and senseless, but yet it is all entertaining in a very low-level type manner – say like if you were watching comedy movies when they just came out in the early 20th century. With a cast like Akshay Kumar, Boman Irani, John Abraham, Mithoon Chakraborthy, and others who are already the veterans of comedy, it does not take much effort for them to entertain, but the characters tend to be sketchy and immature.

The girls in the movie Jacqueline Fernandez, Asin, Shahzahn Padamsee and Zarine Khan have also played their roles well and have also well contribute. There isn’t a single character in the movie which seems like forcefully stuffed in, though at times it feels like Khan has overdone it with the slapping and also copied acts from Hollywood films. The jokes also are pretty dry and almost intolerable at times.

Director Sajid has made sure to make use of each and every character ‘sensibly’, but not always. Overall, the movie might not be a great movie or an entertaining one for the discerning viewer, but if you are into mature comedy with original jokes, this is not meant for you. Get the clue?

Our review? Watch it with absolutely no expectations. You might either love the jokes or hate it depending on your maturity level and your personal notions of what is funny or not. Though it is great to see fresher faces like Shahzahn Padamsee and Zarine Khan, you could just end up laughing off at comedy man Akshay Kumar – who is probably one of the few characters to watch out for.