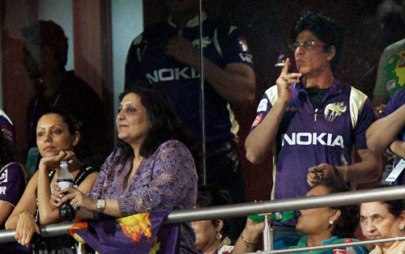 Bollywood Garam: Bollywood actor Shahrukh Khan has been constantly trying to quit his dangerous habit of smoking. The ‘R.A one’ actor made several resolutions in vain and this time he has landed himself in some serious legal trouble.

Recently, during an IPL match, the actor was caught smoking inside the Sawai Man Singh Stadium, after which a complaint has been filed against the actor in court of the chief judicial magistrate in Jaipur. The case will be heard on April 12, 2012.

Nem Singh Rathore, a Lawyer has filed the complaint against the actor on behalf of the Jaipur Cricket Academy director Anand Singh Rathore and said that smoking in public is banned since the year 2000. Rathore added that Shahrukh was smoking in front of thousands of spectators and even the images of the actor were broadcasted live on the TV channel which were showing the match.

The complaint said that the police were confiscating any objectionable items including cigarettes, during frisking. Reports say that the actor was allowed to take the cigarettes inside the stadium which was also a negligence on the part of the police also. Even earlier Shahrukh has smoked in public several and has even promised many times in public that he would quit the habit for good.