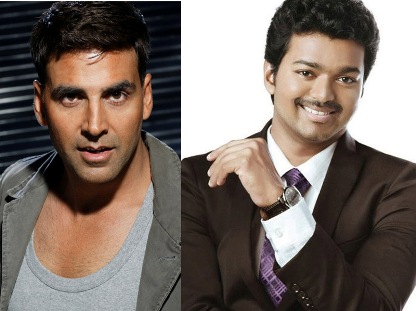 The movie is directed by the south veteran Prabhu Deva and is the one to bring together the two stars, who have different patterns. The two will be seen matching steps on a song by Sajid-Wajid.

‘Rowdy Rathore’ is all set to be released in the month of June and the story of the film has been penned down by Rajamouli, Vijayendra Prasad and M Ratnam. The movie has been produced by Sanjay Leela Bhansali and Ronnie Screwvala and also stars the ‘Dabangg’ girl Sonakshi Sinha.

Vijay in the movie will be appearing for a cameo appearance which will be shot today on May 2, 2012. The Tamil star is currently in Mumbai for the shooting of his upcoming movie ‘Thupaki’. Reports said that the actor did not hesitate and immediately agreed to be a part of the Prabhu Deva movie. ‘Rowdy Rathore’ will also be the return of Akshay Kumar in the action genre.