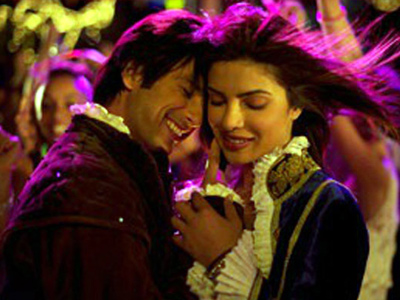 Bollywood star Shahid Kapoor is all set to pay tribute to the legendary actor Shammi Kapoor in the upcoming movie ‘Teri Meri Kahani’. The ‘Jab We Met’ actor has been a big fan of Shammi and has also been a great admirer of the late dancing star.

Film maker Kunal Kohli, has compiled a few songs of the late actor on which Shahid will be seen grooving. Shahid in the song will be seen picking up the nuances of mannerisms as well as the body language which the actor used to carry to woo his co-actresses.

The song is known as ‘Uff Tujhpe Marna Aa Aaya’, which has been penned down by Prasoon Joshi. Kapoor will be seen paying homage to the yesteryear actor. Moreover, Kohli has also planned to invite the whole Kapoor family, including Kareena Kapoor for a special screening of the movie ‘Teri Meri Kahani’.

Shahid in the movie will be seen sharing the screen space with actress Priyanka Chopra. This is not the first time the actor will be paying homage to the late actor. Earlier, the actor paid a tribute to Shammi Kapoor at the Zee Awards show, along with Ranbir Kapoor.