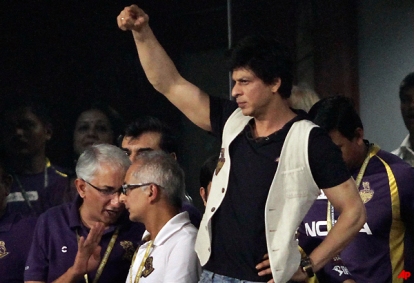 In another controversy surrounding the ongoing Indian Premiere League, the Mumbai Cricket Association (MCA) officials have filed a complaint against the Bollywood star and the owner of the Kolkata Knight Riders team, Shahrukh Khan. The complaint has been filed against Shahrukh for his misbehaviour on May 16, 2012 at the Wankhede Stadium.

The officials have decided to ban the actor for life from entering the premises. Nitin Dalal, the MCA secretary said, “We have lodged a complaint against him at the Marine Drive Police station (for his alleged misbehaviour against MCA officials)”.

MCA treasurer, Ravi Savant said that the star had an altercation with the security and the officials of the association. Savant added, “He misbehaved and abused the MCA security personnel as well as MCA officials, including our president Vilasrao Deshmukh, after the IPL match (between KKR and Mumbai Indians). We have decided to ban him for life from entering the stadium in future”.

Savant while talking about an earlier match of the KKR said that Shahrukh along with his body guards had gone up to the dressing room of the team and had come down and started to step on to the ground, which they were not supposed to do. But when the MCA security personnel told them so, he started abusing them as well as the MCA officials.