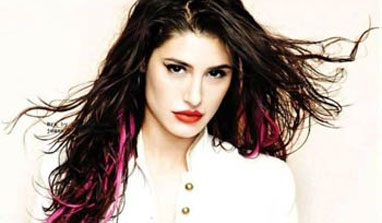 Bollywood actress Nargis Fakhri, entered the film industry with the movie ‘Rockstar’ opposite Ranbir Kapoor. Recent reports suggested that the actress has been approached for a role opposite the super star Akshay Kumar, but now it seems like the actress will not be a part of the movie.

Nargis was in the movie supposed to play the role of actor Mithun Chakraborthy’s sister. But the makers on the other hand insisted that the actress could not fit in to the role.

Sources from the production unit said that the ‘Rockstar’ actress was signed by Himesh Reshamiya and Akshay Kumar to play Amitabh Bachchan’s sister. But then Amitabh walked out and Akshay roped in Mithun Da to play the role of gangster Tatya Tukaram Tendulkar.

Due to this lot of things changed and there was no way the makers could cast the sophisticated Nargis as the earthy actor’s sister. Nargis was very excited to about the role but unfortunately had to opt out of the movie. At present they have kept their options open for a future project. Meanwhile, the hunt is on for a new lady. Paresh Rawal and Himesh Reshamiya in the movie plays the role of Gujarati characters, Champak Lal and Mansukh Lal.