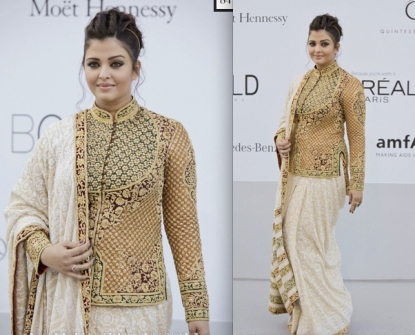 Bollywood actress Aishwarya Rai, after severely being criticised for her post delivery flab, appeared at the red carpet of the Cannes Film Festival 2012. Her appearance at the the Cannes was highly guarded till she made a grand entry at the AmfAR Cinema against Aids gala.

Much contrary to the criticisms, the actress looked fabulous in an Abu Jani-Sandeep Khosla’s creation. Ash also looked slimmer, gorgeous and shut the mouths of all those, who criticised her in recent days by maintaining a dignified silence.

Aishwarya was seen in minimum make up with her hair piled up with a golden band. The actress even spoke about her baby Aaradhya and said, “The baby`s here in Cannes, but not with me tonight, she`s doing well. I can`t complain about being busy with the baby because hectic is always being redefined in my life. It was easy to come tonight because I`m not making any films.”

This year the actress chose to go traditional unlike the previous visits to Cannes. This was Aishwarya’s 11th consecutive visit to the Cannes and as usual the actress has lived up to the expectations of her fans. The slim appearance of the actress on the red carpet was a slap for those who severely criticised for her extra flab.