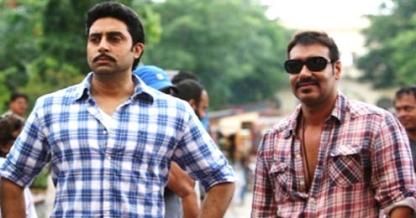 The makers of the movie ‘Bol Bachchan’ have released the official trailer of the flick. Looks like the director Rohit Shetty is ready with his another laugh riot fused with the typical Rohit Shetty style stunts and scenes.

The movie has an interesting and the super hit cast of Ajay Devgn and Abhishek Bachchan. Ajay in the movie is seen playing the role of a wrestler named Prithviraj Raghuvanshi, who takes pride in speaking incorrect English.

While Abhishek plays a side kick, who is known for telling lies to escape tricky situations. The trailer has also shown a twin of Abhishek named Abbas, who is apparently gay.