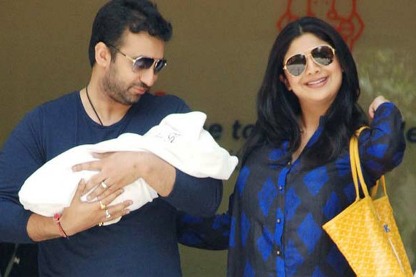 After giving birth to a healthy baby boy on May 21, Bollywood actress Shilpa Shetty and husband Raj Kundra took home their little bundle of joy. Shilpa gave birth to her first child with husband Raj Kundra, at the Hinduja Health care Surgical hospital in Khar area in Mumbai.

Kundra revealed on Twitter, “Today is the day Baby K will head home. I have no idea how my pet dog will react to our new born. Everyone at home eagerly waiting”. The couple took their son at their residence in Juhu around noon.

Raj and shilpa have been married since three years and the first pregnancy of Shetty was confirmed in the month of December last year. After the birth of Kundra’s son earlier this week, the elated father expressed his joy on Twitter.

The 36 year old new mother tried her best to look at her best in a buttoned down blue and black coloured tunic with leggings, along with Raj, who was seen carrying his son. Shilpa even thanked the media for their wishes and for being there. The new born baby is yet to be named and the first alphabet of the name of the baby will be decided by Shilpa’s mother Sunanda Shetty.