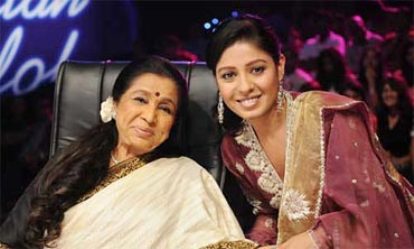 Amidst reports that the producers of the reality show ‘Indian Idol’ are up for a surprise for the audience, there are chances that veteran singer Asha Bhonsle might be a part of the judging panel of the show. Earlier, even Oscar winning composer A R Rahman was approached for the judging panel.

Bhonsle in the past has been a part of many of the shows as a celebrity judge. But this will be the first time the singer will be a full-fledged judge on a show.

The veteran singer will not be a part of the auditions but will be joining the judging panel at the gala rounds. The judging panel for the sixth season of Indian Idol include, Anu Malik, Sunidhi Chauhan and Salim Merchant.

Bhonsle was also supposed to be a judge on the show Sur Kshetra along with Runa Laila, Abida Parveen, Himesh Reshammiya and Atif Aslam. But the show has now been delayed. Asha is known among the most finest singers in India as well as abroad and has a singing career spanning more than six decades. The singer has proved her versatility by working in various genres like pop, ghazals, bhajans, folk, classical, qawwalis and more.