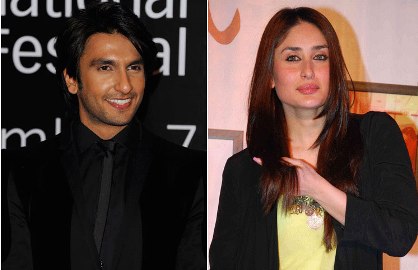 Film maker Sanjay Leela Bhansali has now confirmed that he will be casting Kareena Kapoor and Ranveer Singh for his upcoming movie. The speculations about casting both together was going on for a while, but now it has been confirmed by the official source itself.

Sanjay has also expressed his excitement over working with Bebo that he was planning for the last 13 years. Earlier reports claimed that the movie has been titled as ‘Ram Leela’, but the film maker clarified that it has not been named so.

The fact is that the movie is yet to be titled. After directing the movie ‘Guzarish’ in the year 2010, the film maker now wants to make a movie on the lines of ‘Hum Dil De Chuke Sanam’ and this was how Kareena and Ranveer Singh came in to picture.

Bhansali even assured that the audience can expect the movie to be a full on masala one with romance on its main theme. Reports say that the movie is set in the state of Gujarat and is going to be loaded with songs. Bhansali even expressed that he wanted to work with Bebo ever since she was working on the movie ‘Refugee’ and that he was constantly in touch with her.