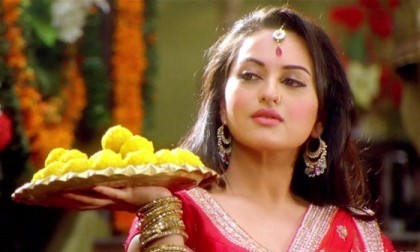 Bollywood actress Sonakshi Sinha who debuted with the movie ‘Dabangg’, admits that she is not bold enough to do an item song. But the actress said that she could do an item song if she is presented in the right manner.

This clearly means that the actress is happy playing the ‘desi’ girl in her movies and that she does not believe in exposing or skin show. Sonakshi while talking to the reporters said that till now she has not been offered any item songs, but if any songs comes in her way and if she is convinced and is presented in the right way they she can.

The actress on May 29, 2012 was in iSkate in Ambience mall to promote her upcoming movie ‘Rowdy Rathore’ with co-star Akshay Kumar and director Prabhu Deva. The movie is all set to be released on June 1.

Sonakshi was then asked about the song ‘Chammak Challo chail chabeeli’ in ‘Rowdy Rathore’, to which she said that it is not an item song and is a situational song set at the backdrop of a wedding. Sonakshi once again will be seen in her cool ‘desi’ avatar in the upcoming movie. Sonakshi even expressed that she is in no rush to change her image.