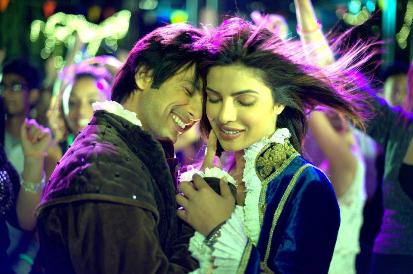 The makers of the upcoming movie ‘Teri Meri Kahaani’, have released another theatrical trailer narrating the story. Director Kunal Kohli, has once again brought together the ‘Kaminey’ pair Shahid Kapoor and Priyanka Chopra for the romantic drama.

The trailer begins at the 1910 era , when the nation is struggling for freedom against the British rule in the country. Shahid is then seen sleeping with an English lady.

Vishal Bhardwaj’s Kaminey was the last movie that featured Shahid and Priyanka together. Later Shahid was seen in the movies like ‘Dil Bole Hadippa’, ‘Chane Pe Dance’, ‘Badmaash Company’, ‘Milenge Milenge’ and ‘Mausam’. Unfortunately all these films could not do well at the box office. Kapoor is now hopeful that his chemistry with Priyanka hits the jackpot at the box office. It will also be interesting for the audience to see the chemistry between the actors who have recently broken up in real life. Watch out the new trailer below.