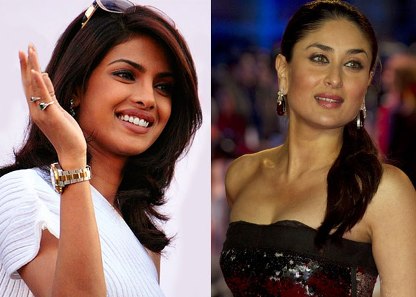 Seems like, Bollywood actress Priyanka Chopra is these days on a friendship spree. Just recently the actress was seen forgetting all the old grudges and attending the party of Karan Johar. Then came Salman Khan’s sister Kareena Kapoor and now the latest one is Kareena Kapoor.

Priyanka was recently seen visiting Kareena’s shooting set and spent some time with the ‘Heroine’ star. The actress even met Madhur Bhandarkar, with whom she earlier worked on the movie ‘Fashion’ and then the entire team of ‘Heroine’.

Priyanka Tweeted about her visit on the social networking site Twitter, “Hopped in on @mbhandarkar268 s set of heroine and hung out with Bebo and my entire fashion team..such fond memories..(sic).” The actress was promoting her upcoming movie ‘Teri Meri Kahaani’ on the sets of the dance reality show ‘Jhalak Dikhla Jaa’, when he came to know that Bhandarkar and his team were shooting on the same studio.

This was when the actress, without giving a second thought went up to catch up with Kareena and the entire crew of ‘Heroine’. Earlier Kareena and Priyanka have shared cold vibes since they shot for the movie ‘Aitraaz’. After that they had almost stopped talking to each other, especially after Priyanka came closer to Shahid Kapoor.