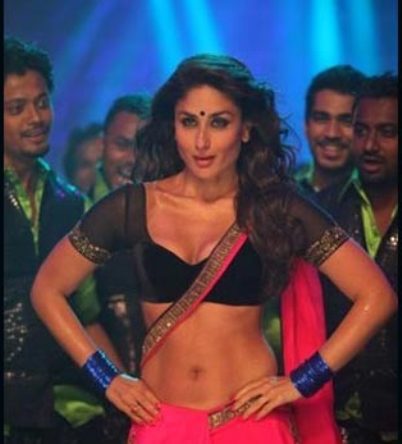 After a fun filled ‘Chammak Challo’, here is the Bollywood actress Kareena Kapoor once again with the item song ‘Halkat Jawani’ from the upcoming movie ‘Heroine’ directed by Madhur Bhandarkar. The shooting of the item song began on June 7 in a studio in Mumbai.

Bebo has been working out hard for the song along with her dietician Rujuta Diwekar for weeks and has finally got the desired look. Moreover, most of the people on the sets are also following the same diet plan. The song has been recorded by Sunidhi Chauhan and is choreographed by GAnesh Acharya.

On the sets of the song, Madhur was seen standing and observing the workers busy setting up the cameras, while the heroine was seen chatting over the phone. It was break time when director Madhur revealed that it is an award function where the actress will be seen performing.

Karan Johar who was shooting in the near by studio dropped by and was seen having a glance in the monitor to which Ganesh shouted ‘Superb’ but the actress did not seem satisfied and requested for another take. Kareena while watching herself at the monitor said that this is the raunchiest item songs that she has ever done as there is too much of exposing.