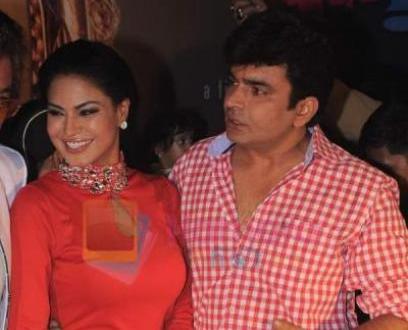 Pakistani actress Veena Malik never fails to impress the opposite sex, be it in reality shows or in real life. The actress has found a new fan in Raja Chaudhary, also known as former husband of TV actress Shweta Tiwari.

Reports say that Raja is totally smitten by Veena and praises her whenever given an opportunity. Chaudhary is so fond of the actress that he was also quoted saying that he wants to marry her.

Reports say that the actor does not even mind being called Raja Malik. Raja has been fond of the actress since a long time and met the actress during the music launch of Veena’s upcoming release ‘Daal Mein Kuch Kala Hain’.

This was where Raja lost his hear for Veena. Do not be surprised if Raja comes up with a proposal for Malik in future and Veena is surely enjoying all the attention she gets. Recently, Veena was also supposed to star in the reality show ‘Swayamwar’, but the show could not be materialised as the channel itself shut down a while back. Malik had even shot for a few promos of the show which were also aired on the channel. Reports say that the channel received record breaking entries for the show.