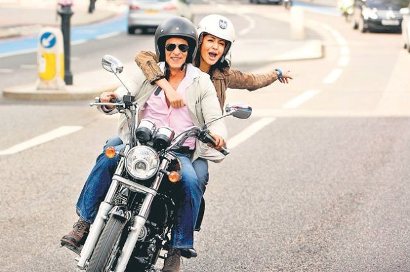 Bollywood’s Badshah, Shahrukh Khan has been roped in with his ‘Rab Ne Bana Di’ co-star Anushka Sharma and has already started shooting for the flick in London. The pair will be starring for the upcoming Yash Chopra movie , which is yet to be titled, but the crew of the movie is already facing problems while shooting.

The pictures with Anushka enjoying a bike ride with Shahrukh have already surfaced and most of the scenes in the movie have to be shot on the streets. But the major hindrance are the fans of the actors, who have become a major problem for the crew.

Because of the crowd, the camera people and the rest of the crew are not able to work properly. Despite adequate security measures to keep the crowd away, it often results in halting of the shoots. Due to this the shooting is going on in a very slow pace.

To make things even worse, the ‘Don’ actor is being stalked by his fans, who follow his every move from the hotel where he is staying. Things have become even more difficult for the actor as he is not only shooting but is also holidaying with his kids in London.