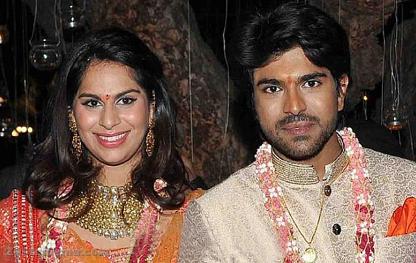 South super star Ram Charan Teja got married to his childhood sweetheart Upasana Kamineni on June 14, 2012. Teja is the son of the super star Chiranjeevi, who also geared up in the preparations at his son’s wedding and managed to make it a grand affair of the season.

The guests at the high profile wedding included people from the film industry as well as Indian politics including Bollywood super star Amitabh Bachchan. Reports say that the wedding ceremony went on in a very traditional way and the bride and groom decided to receive gifts in the form of blessings only.

The two exchanged vows in front of their family and friends and will be marrying again for their fans. Close friends of the couple said that the wedding is not just for the couple but for the entire state and its people. Ram Charan and Upasana have been involved in charity and will be undertaking several activities to help the needy.

The wedding was held at Temple Trees in Hyderabad and was attended by a whopping 4,000 friends and family. In the evening father of the groom, Chiranjeevi will be hosting a reception for around 7,000 guests at Hyderabad International Convention Centre. Moreover, June 15 will be the day reserved for the fans of the actor, which will be followed by lunch.